Still from the Channel 4 series, The Mill

The child workers who lived at Apprentice House received a small amount of formal education. A teacher was employed from as early as 1788 to provide a basic education to the apprentices, though this seems to have been only for the boys. When the Apprentice House superintendents were quizzed by the Factory Commission in 1833, Elizabeth Shawcross claimed that ‘the [Greg] ladies teach the girls [on Sunday afternoons], and the schoolmaster the boys, 3 nights a week from eight to nine o’clock generally’. Additionally, Mrs Shawcross described teaching sewing to the girls in the evenings, whilst the girls not only made all of their own clothes but the boys’ shirts as well. When Joseph Sefton, an apprentice who had run away, was interviewed by Middlesex magistrates in 1806, he complained that ‘I was obliged to work overtime every night but I did not like this as I wanted to learn my book’. He suggested that the boys only had one lesson a week from the schoolmaster, and noted that though ‘we had a school every night’, individual boys ‘used to attend about once a week (besides Sundays when we all attended) … 8 at a time I wanted to go oftener to school than twice a week including Sundays but Richard Bamford [the mill manager] would not let me go’. 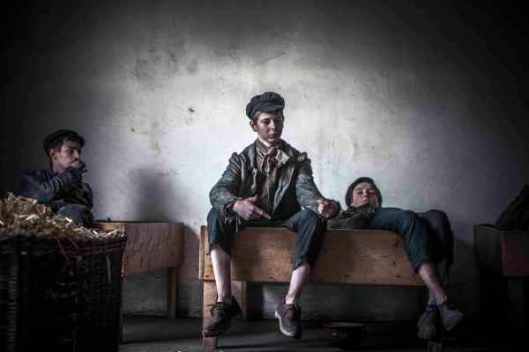 Still from The Mill

Though we do not know what the boys were taught, it was likely to have taken the form of reading, writing and arithmetic, and may have included other subjects such as geography, though since time was short – with Joseph Sefton’s account suggesting just an hour a week – the education was likely to have been very basic. Books such as Joseph Collyer’s The Parent’s and Guardian’s Directory, and the Youth’s Guide, in the Choice of Profession or Trade (London, 1760), described the necessary education for apprentices in terms of teaching deference, obedience and a love of God, along with a ‘common education’ that focused on practical learning and the skills needed in trade, and specifically the three Rs. 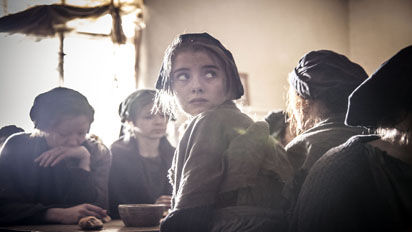 Still from The Mill

Unitarians, such as the Gregs, tended to favour education for all social classes, and Unitarians were active in promoting schooling for working-class children throughout Britain. Unitarian women were particularly involved in Sunday schooling, where the focus was firmly on religious education.[1] Both boys and girls at Apprentice House would have attended Sunday school, and at least in the early years of the nineteenth century, their religious education was supplemented by the efforts of the Hannah Greg, the mill owner’s wife, with her daughters joining in later years, as described in Elizabeth Shawcross’s account above.

Two manuscripts survive amongst the Quarry Bank archive that were written by Hannah, and at least one of these was explicitly directed at the children at Apprentice House, and was entitled ‘Sermons for the Apprentices’. These sermons appear to have been delivered during 1819, with some repeated the following year. Based on stories and psalms from the Bible, they were intended to impart important life lessons for the children. Proverbs 22, ‘A good name is rather to be chosen than great riches’ was said to teach the children that whilst ‘we may work hard all our lives and never become rich’, everyone could aspire to have a good name and could secure this ‘by diligently performing every duty which belongs to the situation in which God has placed them’.

This lesson was echoed in another sermon on Psalm 9, which reminded the children that the best use of one’s time was to ‘cheerfully and diligently [follow] our several employments in life’, whilst warning them that the ‘slothful and unprofitable servant’ was liable to be ‘cast into outer darkness where was weeping and gnashing of teeth’. The virtue of humility was mentioned in more than one of Hannah Greg’s sermons, and though Unitarians were a sect that encouraged children to think and to reason for themselves, it is hard to escape the conclusion that one of the purposes of her teaching was to promote docile and obedient workers.

Hannah’s sermons on the wonders of God’s creations as evidenced by the human body, and the edicts to ‘love one another’ and to please God by acting with ‘love, wisdom and goodness’, may seem fairly benign. But the children were also reminded that God was ‘ever present with you in every moment of your lives’, and that bad conduct could result in being dispatched into Hell Fire. A similar tone was apparent in a work she wrote in 1800 entitled ‘catechisms of safety & health’. Despite its title, this appears to have been written with her own children in mind, yet though she described the benefits to their constitutions of horse riding, cricket and fencing, she also asserted that poor conduct would lead to physical ill health, so that the answer to the question ‘What painful operations must children often submit to if they are disobedient, imprudent, inattentive, intemperate, passionate &c?’ was said to be ‘They may be obliged to have Blisters, Leeches. Emetics, teeth drawn, bones set, cupped, amputation &c, tied in bed blinded &c &c &c’.