Last year, in a post titled Apprentices and their boxes, I wrote about plans to give visitors to Quarry Bank a better understanding of what it was like to be a child worker living in the Apprentice House during the early industrial revolution (c.1784-1834). One of the ways that we will be doing this is by telling the stories of individual children through an examination of their personal possessions, and specifically by recreating apprentices’ boxes and their contents. Some of the main items that will go into these boxes will be items of clothing.

One of the reproduction boxes

We know that it was likely that apprentices had at least two sets of clothing each (though since stays – a precursor to the corset which would have been worn by older girls over their shifts – were expensive, older girls who worn them probably one only one set of these). A letter from a mill manager to parish authorities in 1817 concerning the supply of 12 ‘young girls’ of 10 to 12 years of age from the workhouse specified that they should be sent to the mill with ‘clothing sufficient to keep the children … say 2 shifts, 2 pairs stockings, 2 frocks or bedgowns, 2 brats or aprons and two guineas to provide them other necessaries’.[1] The shift was the basic form of undergarment for all women and girls, and was a simple linen or cotton garment with sleeves. These would have been worn under clothes during the day and on their own for sleeping in at night. A frock was either an outer garment for indoor wear that consisted of a bodice and skirt, or something more like a gown (or dress), that opened at the front and was worn over the shift. Bedgowns were also day wear, and covered the top of the body like a modern tunic, while a petticoat (more like a modern skirt) would be worn to cover the lower body. Both gowns and bedgowns would have been worn with an apron or a brat (a brat being a form of overgarment that resembled a pinafore).

What did boys wear? One boy housed at the Apprentice House, Joseph Sefton, gave evidence to Middlesex magistrates in 1806 after running away from the mill in which he described getting ‘clean shirts every Sunday’ and ‘new clothes for Sunday once in two years, we had working jackets new when these were worn out and when our working trousers were dirty we had them washed, some had not new jackets last summer but they were making new ones when I came away’.[2] For boys, shirts were the main undergarment, worn under clothes and at night, hence the need to wash them regularly, as was also the case with girls’ shifts. Since other items of clothing would have been laundered less often (if all all) it seems likely that at any one time, one set of clothing would either be being laundered (most likely in the case of shifts for the girls, and shirts for the boys), or be stored in an apprentice’s box.

In the detailed account books for the Apprentice House we see spending listed between 1787 and 1819 for a variety of textiles to make clothes: woollen cloth, waistcoating, broad cloth, calico and dyed calico and striped cotton, plus cloth to make girls’ aprons and gowns and cloth for boy’s waistcoats and coats. Money was also spent on thread and buttons for boy’s jackets. Many of these materials would have been made into clothing by the female apprentices, who were taught to sew in the Apprentice House and were employed in making clothing for themselves and for the male apprentices in the evenings. In addition, payments in the Apprentice House accounts show that expenditure was laid out for ready made breeches (or short trousers), shoes and the mending of shoes (almost certainly clogs with wooden soles and leather uppers[3]), girls’ stockings (opaque and made of cotton or wool), hose (like stockings, worn by males and females), boys and girls hats, ‘Silk & linings for girls hats’ (which suggests that the girls had a form of ‘chip’ hat, made of either straw or chip straw), girls’ caps, girls’ capes, stays and hankerchiefs (which might have been worn instead of caps or hats, or round the neck, and in the north were described as often being red in colour[4]). In line with most of the rest of the population, there were no signs of either boys or girls wearing anything approaching modern undergarments or drawers, though boy’s breeches may have been lined. It was common practice for poorer people not to wear the sorts of garments that we would understand as underwear until at least the mid nineteenth century.[5]

But though we have these important details about apprentice clothing from the Quarry Bank archive, the descriptions provided in these sources are not detailed, and do not tell us what such clothing would have looked like (nor what it would have been like to wear). For this we can turn to contemporary images of workers’ clothing and to surviving examples of clothes from this period held in the Gallery of Costume, Platt Hall, Rusholme in Manchester. George Walker’s Costume of Yorkshire (1814) is a particularly useful source of visual information for our purposes. His book provides us with this image of ‘factory children’, noting that ‘A great part of the West Riding of Yorkshire abounds with cotton mills, cloth manufactories, and other large buildings appropriates to trade’ in which such children worked. Walker’s picture shows a boy and girl walking either to or from work with a basket of food for the day. Both wear a brat over their clothes. The girls is wearing what looks like a bedgown and blue petticoat, and the boy has on a brown linen shirt, brown breeches and round felt hat. 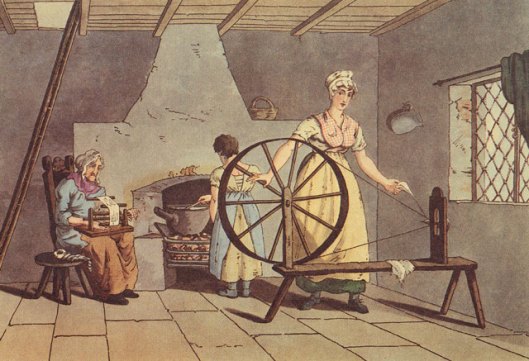 Walker’s image of a woman spinning wool shows us what older girls and women might wear, and also has a young girl behind the main figure, stirring the cooking pot. Both are wearing aprons, rather than brats over their gowns, and the young woman is wearing a white linen or cotton cap, a bedgown, green petticoat and a pink and white squared neckerchief. The girl behind her is wearing what looks like a shift and frock with her apron. Note that Walker consistently depicts younger labouring girls with short haircuts, whilst older girls and women are shown wearing caps over longer hair. Vivienne Richmond, in her study of poor people’s clothing in the nineteenth century, notes that for teenage girls, wearing longer skirts and wearing one’s hair ‘up’ was often the first public step towards womanhood.[6] 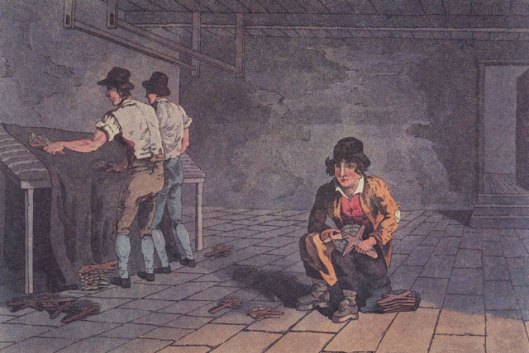 Walker’s book also provides us with an image of a boy working in another branch of the Yorkshire textile industry, ‘The preemer boy’. Such boys were described as ‘the drudges of the [cloth] dressing shops’. He is depicted here wearing what appears to be a felt hat, shirt, waistcoat and jacket, with clogs in his feet. While his legs are partly obscured, his adult co-workers are shown more clearly wearing breeches and blue stockings or hose (coloured, rather than white stockings, would have been the norm for the labouring classes[7]).

This picture of potters from William Pyne’s Costume of Great Britain (1805) also shows boys and men working in similar dress, with the men sporting leather aprons and red neckcloths.

It was not uncommon for the masters or mistresses of runaway apprentices to advertise in local newspapers in the hope that they would be returned, and such adverts can contain information about clothing. Though no adverts for those apprentices who absconded from the Apprentice House have been located, one for James Locket, an apprentice to a stone mason in Kelshall, Cheshire, which appeared in the Chester Chronicle, 7 June 1791 described the same sort of dress that has already been discussed: his main garments being ‘a blue coat, fustian waistcoat and breeches’.

Neither Pyne’s nor Walker’s working children are wearing much in the way of outer garments such as cloaks or coats (or outside hats on top of their caps in the case of girls). However, the Apprentice House accounts show that girls were bought capes (a cloak with a hood), and that both boys and girls wore hats. A cape from around 1800-1820 can be found amongst the collections of the gallery of Costume in Manchester: 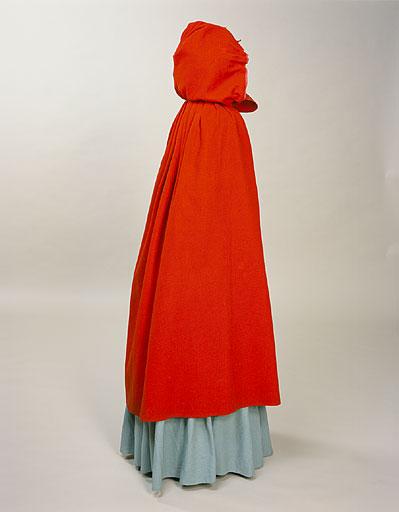 This one is quite a fine example, and was said to have been worn for a wedding in Mobberley in Cheshire. Though we might imagine the clothing of the poor as being particularly drab, this was not necessarily the case, and other contemporary images in addition to the ones reproduced here show greens and blues, as well as reds, much in evidence.[8] Red cloaks like this were worn by all classes of women, especially in rural areas, and they were often noted by foreign visitors as being traditional English dress.

We also know from the Quarry Bank records (and described in my earlier post in a post Apprentices and their boxes) that individual apprentices sometimes borrowed money on account from their wages to buy other – apparently less utilitarian – items of clothing, such as a new gown or slippers for girls, and a watch for one boy.[9] Manchester’s Gallery of Costume also has objects that might resemble some of the clothing that some apprentice girls bought.

These slippers, from 1800-1810, were no doubt much finer than Quarry Bank’s child workers could afford, but they give an idea of the type of footwear that constituted a slipper in the early nineteenth century, and which were a world away from the sort of clogs that the children would have worn to protect their feet at other times.

This cotton dress from the last years of the eighteenth century shows us the sort of bright and relatively cheap gown that labouring women might buy (this one had formerly belonged to a domestic servant, though again, might be finer than the one a mill-worker would have bought, especially as we know that servants typically were given the hand-me-downs of their employers).

The watch that one apprentice boy bought would have been a pocket watch. Warrington Museum has a good example of this sort of timepiece, made by local watchmaker James Carter between 1823 and 1824. This would have been kept in a fob pocket in either the boy’s breeches or his waistcoat, with a hanging watch chain the proud sign – even when it was not in use – of his ownership of what was both a prestigious form of male jewellery and a practical tool for measuring the time. 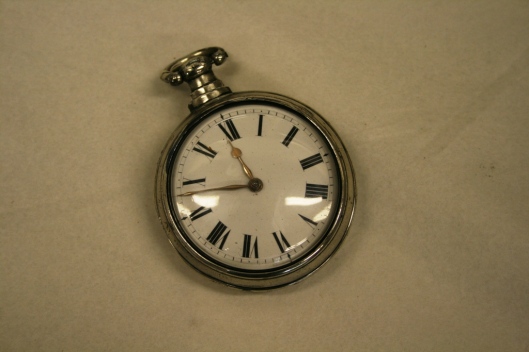 [8] See, for example, image by Henry Wigstead reproduced in Styles, The Dress of the People, p. xii.